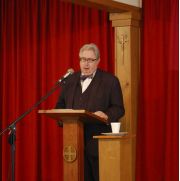 Theme: Total Consecration to Mary: The Remedy for our Ills.

If Mary is our Queen then we are monarchists. Jesus is our King, the King of the Universe, King of every nation even of those who reject Him. Christ is King by title: as Creator, by right of descent, as Heir of David the King, and by right of conquest, conquering sin from the Cross. Mary partakes of this royalty as the perfect daughter of the Father, as daughter of David and Mother of the King of kings, and as Co-Redemptrix. Charles then gave a fascinating tour of the honors bestowed upon the Queen Mother by Catholic nations throughout history. This was the theme of his cultivated and inspiring presentation. Mr. Coulombe took us to Hungary, Poland, Ireland, France, Spain, South America, China, and lastly these United States chronicling with incredible erudition many of the titles by which Our Lady has been honored in various states and highlighting many of the shrines devoted to her throughout the land. From the most famous, the Shrine of the Immaculate Conception in Washington DC, to the most unknown, glorious yet unpretentious, the Shrine of Our Lady Reconquistadora in Santa Fe, New Mexico. Charles ended with a call to heroic fortitude in these times. Slaves of Mary pledge allegiance to Mary Queen, Mother of Catholic Heroes.
Also Available as CD, DVD, or MP4