My cart Cart is empty
Cart is empty
View cart
Checkout
Home/Society/Politics and Society/National Greatness
We apologize for the layout change.
We are working on fixing it soon. 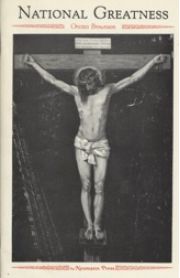 By Orestes A. Brownson

The insightful Introduction to Brownson’s treatise, by Saint Benedict Center’s good friend, Francis Conklin, is alone worth the purchase of this thirty-page booklet.  Mr. Conklin very adroitly applies St. Augustine’s theme of the two cities, that of God and that of man, to our modern situation, wherein the city of man (the New World Order), is waging war on the City of God, the Mystical Body of Christ, the Catholic Church. Only by suffering for Our Lord will the Church triumph as did the Suffering Savior.  Brownson, however, is writing for Americans.  As a deeply religious Catholic and a patriot, in National Greatness, he is calling upon his countrymen to examine what “greatness” really means and what is its true measure.  The moral ills he addresses in this work are no different than in our own time, except that the degree of depravity we are living through today is bringing us closer to the brink of the disaster that he foretold would come upon our nation if it did not seek the true good.  What is “greatness”? Brownson asks again and again in the treatise, while each time stripping away at the self-glorifying façade that has usurped the real meaning of the word.  To be great is not to be brave, rich, or brilliant, it is nothing more than “to live for the end for which our Maker intended us.”  And since that end is supernatural, as are the means, sanctifying grace and the sacraments, our democracy will never survive unless America becomes Catholic. Although this treatise was written a century and a half ago, it is more timely than ever, a must read for every militant Catholic and every Protestant who loves his country for the right reasons.


Published in 1991 by the Neumann Press