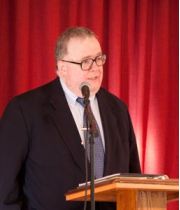 C.J. Doyle is a historian, political analyst, and well-known Catholic activist. His expertise is American history, from colonial times until today. C.J.began his talk by reviewing the persecution leveled against Catholics in the earlier days of our Republic, the liberalism of many aim-to-please prelates, the stalwart militancy of other bishops, such as Bishop Hughes of New York. He then introduced his audience to two heroic, but neglected, Catholic statesmen, James Michael Curley, four term mayor of Boston and one term governor of the state, and fellow-Bostonian, the avidly pro-life John William McCormack, who served most of his lifetime in the US House of Representatives from 1928-1971. He was also Speaker of the House from 1962-1971. Fascinating details and anecdotes make for another packed C.J. Doyle information tsunami.