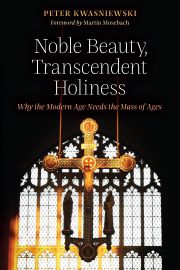 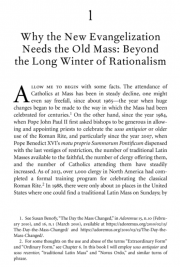 Why the Modern Age Needs the Mass of Ages

The traditional liturgy of the Roman Catholic Church is a highly formal ritual unfolding in layers of elaborate gesture, rich symbolism, whispered Latin, and ancient plainchants. “Experts” after the Second Vatican Council were convinced that such a ritual was irrelevant to “modern man.” To the shock of some, the delight of many, and the surprise of everyone, the old Latin Mass (and much that went along with it) has tenaciously survived during the past half-century and become an increasingly familiar feature in the Catholic landscape. What are the reasons for this revival, especially among the young? And why is this development so important for the renewal of Catholicism?

Peter Kwasniewski offers a lively account of the noble beauty and transcendent holiness of the traditional Roman liturgy, which humbles us before the mystery of God, stirs us with its pageantry, carries us into sacred silence, and bears us to a world of invisible realities. He contrasts this priceless treasure with the rationalistic reforms of the sixties, which yielded a Catholic liturgy severed from its own history, inadequate to its theological essence, unequal to its ascetical-mystical purpose, and estranged from its cultural inheritance. His conclusion: if there is to be a new springtime in the Church, the widespread restoration of the traditional liturgical rites will be at the heart of it.