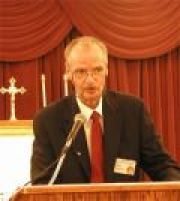 Theme: Honoring the Feast of Christ The King

Title: Our Lady of Fatima and the Conversion of Russia

In 1917, Our Lady visited three young shepherd children in Fatima, Portugal to deliver a message from God to the world on how to save us from persecution, war, and ultimately, hell. A miracle of Biblical proportions confirmed the gravity of her message and requests, one of which was the Consecration of Russia to the Immaculate Heart of Mary by all the Bishops of the world in union with the Pope. Mr. Potter examines a unique aspect of the Fatima message concerning Russia that isn’t touched upon elsewhere and that is the Catholic influence that existed a century before Our Lady’s message came to Fatima. In addition, he refutes the Bolshevik Revolution’s propaganda against the Russian aristocracy. It is in providing the facts and historical development of 19th to early 20st century Russia that he seeks to answer the question of why Providence had singled out Russia, in particular, to be converted and why She still has not been converted.