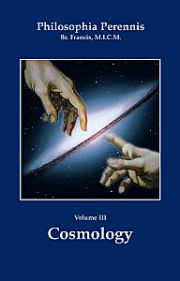 This is the third course, Volume III, in Brother Francis' eight course study of perennial philosophy. An Introduction to Philosophia Perennis (Volume I) is also available. Volume II, Logic, which will follow Volume III, is a larger production needing illustrations, consequently it was decided to go ahead with cosmology first. After opening this book you will see why any educated person with a disciplined mind should have no problem apprehending this fascinating subject matter which, on account of its proximity to our everyday awareness of reality, is so easy to savor. More info on the book and the author will help you see what we mean. With his background in physics and mathematics, which he taught at the American University of Beirut, in Lebanon, in the late 1930s, the mind of Brother Francis, the philosopher, ambulates, quite literally, on very familiar turf in this extraordinary voyage of wonder and discovery. The realm under investigation is right in front of our eyes, it is the world of matter, the domain of what Aristotle called ens mobile, being in change. There are two words which convey the idea of the whole of material creation: universe and cosmos. The Latin concept (unity in diversity) actually defines the Greek idea of order and harmony. Brother Francis launches his course on solid ground with a defense of common sense as opposed to the gelatinous mucky assertions oozing from the professorial chairs of nearly all collegiate departments of science. Obliterated is the insane notion of order arising out of chaos. Without sound philosophy setting the limits of scientific inquiry and regulating the modern tendency for cosmological usurpation, science degenerates into scientism. There is no chapter in the fifteen which comprise this book that is not riddled with references to sacred writ. God is the Creator of this universe. All things are ordered to His ends. There is purpose in everything God has created. All matter is at the ultimate service of man's supernatural vocation. Disorder enters when man loses his spiritual sense and material things dominate his heart and choke the royal nobility of soul which His Maker endowed him with. Gratitude and wonder are exchanged for self-gratification and boredom. In this topsy-turvy world the air we breathe has suddenly taken on a toxic inversion of purpose: the contingency of things has usurped the necessity of God in the disordered vision of the modern mind. This course in cosmology is as much a refreshing adventure as it is an intellectual challenge. It was given in the spirit of Saint Thomas, who, besides his title of Angelic Doctor, has also been called the Doctor of Creation. Nature and the fidelity thereof, matter, space and time, substance and accidents, wisdom and the laws of nature, unicity and the four causes, and finally, the culminating chapter on the final cause, or teleology (purpose) of things, make for a fascinating study for everyman and woman who wishes to be childlike and repose in the contemplative embrace of wonder.

The philosophy course has only been put in book form for Volume 1 and 3.