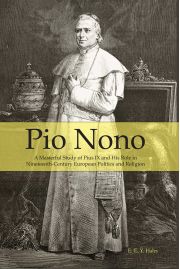 Pio Nono: A Study in European Politics and Religion in the Nineteenth Century

Even though the duration of his papal reign has since been eclipsed by that of Pope John Paul II, at the time of his death in 1878 Pope Pius IX had served as pope longer than any pope besides Saint Peter. His papacy, from 1846 until 1878, was the political and religious pivot-point of the nineteenth century.

He was elected pope as the candidate of the politically “liberal” party in the College of Cardinals. By liberal here we mean those who were sympathetic generally towards the new republican and anti-monarchical leanings of so many leaders and thinkers in those post-enlightenment years; but the violent revolutions of 1848 convinced him that the liberals had far more than merely political ends in mind. In fact, he now believed that the destruction of the Church was their ultimate goal, and for many of the leaders, it was. Because of that, he became, although not by his choice, a political as well as a religious warrior.

Because the position that Pio Nono inherited as Pope was that not only of the universal shepherd of the faithful and vicar of Christ, but also that of a temporal Prince and sovereign, the task of leadership before him was inextricably intertwined with political and revolutionary affairs. The great battles of church and state that dominated that century were, by the grace of God, his to fight. Mr. Hales beautifully and faithfully tells us the story of that battle and Blessed Pio Nono’s part in it.