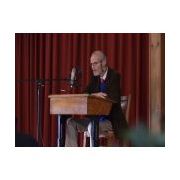 Gary Potter graced our conference once again. He has spoken at every one of our conferences. The title of his talk was Russia, America, Fatima. Communism is atheistic, but liberals in America, Mr. Potter stressed live as if God does not exist. Yes, Russia is schismatic; however, there are signs today that in that vast land the Christian faith is more alive than in the USA. As Americans, he said, we ought to be more concerned than we are with the conversion of our own nation. Our problem here is that there has never been a Catholic culture. “The core of the fruit of civilization is religion,” he noted, “and culture is the skin of the fruit.” Tears and gashes will corrupt the fruit. All that is summed up in the word “modernity” is corruption. What God has a “right” to expect of us is fidelity to the Faith and its morals. Prayer, he said, must be integral in all we do. We must fill in the free time that we have with not only contemplation in silence, but appreciation for the works of culture, books and art. Mr. Potter spoke about building Catholic communities locally and encouraging others doing the same elsewhere. We are not Amish, he said; we are “in the world” while not being of it. Catholic communities can be a nucleus for evangelization.