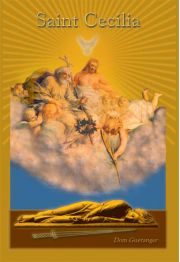 In the nineteenth century there was a concerted effort on the part of liberal revisionists to undermine the Church’s history by challenging the veracity of the Acts of the Martyrs. Some miraculous events associated with the lives of very popular saints, whose names were canonized in the Roman Missal, were treated with ridicule by scholars more concerned with documents than the living evidence of common tradition.
It was righteous indignation that moved Abbot Dom Guéranger to defend the cause of Saint Cecilia, whose holy celebrity had spanned fifteen centuries. The abbot’s strategy was to validate the traditional accounts of all the martyrs’ lives by exonerating just one. He achieved this in the holy virgin Cecilia’s case by presenting in book form every morsel of factual evidence available, especially that which modern archeological excavations offered.  As a result of his labor, there arose a refreshing new devotion to the young martyr, and – at least for a time — the cynical scoffs of the proud were silenced. This particular biography was written in response to the request of his co-reformer and friend, the Benedictine Abbess Cécile Bruyère.

Prospér Louis Pascal Guéranger was born in France, in 1805, at Sablé-sur-Sarthe. In the Napoleonic era, 1827, during the continued anti-clerical aftermath of the French Revolution, he was ordained a parish priest.  As a young curé he authored several works on church-state relations. In 1836, having purchased an abandoned priory that was for sale in Solesmes, he and five other parish priests took solemn vows as Benedictines, with the intention of restoring the monastic life in France according to the ancient rule of Saint Benedict. Until his death there in 1875, Abbot Dom Guéranger devoted himself to restoring the cenobitical life as originally cultured thirteen centuries earlier by the father of western monasticism. He did much by his writings and prayers to keep the church in France loyal to the person of the Sovereign Pontiff and away from the dangers of both Gallicanism and Jansenism.