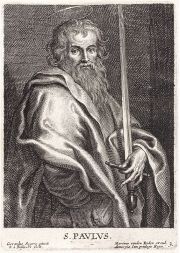 In the early days at Saint Benedict Center Brother Francis Maluf gave nine talks to a class on Saint Paul's Epistle to the Hebrews.

The last of Saint Paul's fourteen epistles was written around the year 62, from Rome and sent to all the Jewish Christians in Palestine. The content of the letter is extremely theological, whereas most of the Apostle’s other epistles were pastoral.  Clearly, as Brother Francis points out in these fascinating lectures, it was St. Paul’s intention to also reach the unbelieving Jews. Those being addressed by the writer knew the scriptures and they had to have known them well. Brother Francis guides his listeners, chapter by chapter, on a delightful journey of “Biblical” proportions. For the unfamiliar, the Old Testament is made much more understandable. One who has a basic knowledge of the Old Testament can read this epistle on their own and learn much, but, as the inquiring eunuch of Queen Candace said to Philip the deacon concerning the book of Isaias, “How can I [understand] unless some man show me?”  Our interpreter of this enlightening but mysterious epistle, is Brother Francis.  He seems to enter into the persona of St. Paul as he makes his inspired words come alive.  One could say that Brother’s audience joins the Catholic Hebrews in spirit as it relishes the wisdom of God as He gradually prepares His people by types, figures, and rituals for the advent of Christ, the Lamb of God, and the Holy Mass.   This epistle provides the keys by which we can discover Christ in all the figures and prophecies of the Old Law.