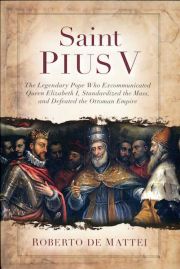 Few Catholic writers have been as prolific as University of Rome Professor Roberto de Mattei. Over decades he has produced a wealth of incisive analyses about the Catholic world’s collapse and charted an authoritative path back to health and sanity.

He has now written an exceedingly compelling and powerful biography of Pope Pius V, widely recognized as one of the boldest and most courageous popes of the past millennium, who decisively defeated the Ottoman Turks at the Battle of Lepanto and fought head-on the Protestant Reformation, which had assailed the Church.

The life of every Christian is a battle, and St. Pius V offers us a luminous example of leadership in a time of trial. In these pages, you’ll learn:

You’ll also learn of Pope Pius V’s remarkable spiritual life and regimen, his foresight and prudence in dealing with the iconoclastic fury of the Huguenots in France, and the way he handled the trials of excommunicated heretics and reformed the rotting religious orders of his
day.

Professor de Mattei makes clear that Pope Pius V was so effective and so holy that no pontificate can be judged accurately without measuring it against his. In page after fascinating page, he shows contemporary Catholics what it means to be “a great pope” or “a saintly bishop.” Here, at last, is the complete life and times of one of the Church’s greatest prelates by one of her finest historians.