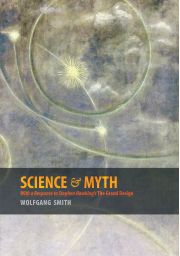 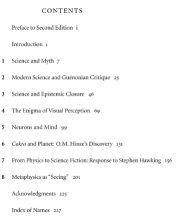 With a Response to Stephen Hawking’s The Grand Design

To read Wolfgang Smith is to encounter that rara avis: someone deeply versed in science and religion. Whereas most who stand on the side of religion lack the technical expertise to know science “from inside,” scientists and writers on science are, as a rule, blind to their own metaphysical assumptions, and woefully inept when it comes to subtle metaphysical points. Not so for Professor Smith, who moves easily between these two essential ways of knowing: between the core twentieth-century discipline of physics, first of all, and metaphysical doctrine as articulated by the sapiential traditions of mankind. In Science and Myth the author shows that science too has its mythology, unrecognized and unacknowledged though the fact be. Starting with a profound clarification of this basic issue he goes on to explain the metaphysical significance of scientific findings relating to visual perception, the relation of neurons to mind, and much else, all of which leads up to the central chapter on Stephen Hawking’s best-selling book, The Grand Design. The choice is optimal: for in this book the celebrated astrophysicist, continuing the long-standing tradition of materialist scientism, ratchets the claims of a mathematical physics to hitherto unknown heights: he argues that the very existence of the universe—“that there is something rather than nothing”—can be explained on scientific grounds. Professor Smith first presents Hawking’s case, summarizing his entire argument, and then proceeds with a magisterial point-by-point rebuttal that leaves his grand thesis in tatters. Finally the author broaches the subject of metaphysics itself. He makes the point that metaphysics is in essence a “seeing of the Real” that is direct, and which therefore transcends the limitations of scientific knowing. He shows that metaphysics is ultimately a knowing of the actual phenomenon in the original sense of the Greek term as “that which shows itself in itself.” And he concludes by showing on the basis of Christian texts that the authentic Phenomenon is none other than the Logos, the eternal Word.