My cart Cart is empty
Cart is empty
View cart
Checkout
Home/Audio and Video/Conference Talks/Sloth, Disillusionment, and the Higher Chivalry... 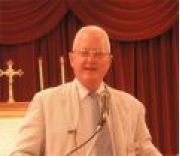 Himself a military man and a professor of literature, Robert Hickson can well appreciate a writer who, through the genre of the historical novel, can paint a realistic picture of the human drama that war produces, the higher chivalry it often engenders, as well as the wreckage it leaves behind in shattered lives, disillusionment, and, too often, despair. Dr. Hickson introduces his listeners to a brilliantly written trilogy, Sword of Honour, written by Evelyn Waugh, who also served as a paratrooper in the second world war. Taking his listeners on a journey through these powerful volumes, our speaker instantly engages the heart and, through the vivid portrayal of the principal characters in this moving story, he lifts his audience to higher levels of moral understanding. Masterfully interpreting the personal influences (broken trust, loneliness) that motivated the author, Hickson delivers a moving eulogy for a man he admires and enables others to admire, even identify with. Vividly drawn through our interpreter's eloquent presentation, Waugh's insights into the conflicting complexities that motivate human behavior in a wartime environment stir the heart. Doctor Hickson's focus is on the author's penetrating grasp of higher chivalry as it manifests itself in a life of sacrifice. As members of the Church militant, we can learn much through the medium of this genre, especially when it is translated for us through the empathetic soul of such a gifted literary scholar as Robert Hickson. If you value nobility of soul and honor, in whatever field of battle God has placed you, you will love this presentation. From 2007 SBC Conference