HomeAudio and VideoConference Talks2013Social Credit in the Light of the Catholic Social Teaching ... MP4
26 of 32 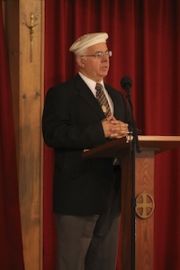