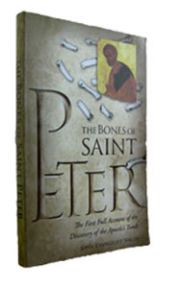 In the year A.D. 68, St. Peter was put to death in Rome as an enemy of the state. Roman law forbade him a proper burial and denied his friends even the right to recover his body, so few souls were able to learn his final resting place.

For centuries, tradition held that to honor and preserve the mortal remains of this true Prince of the Apostles, St. Peter’s Basilica had been built right over St. Peter’s grave.

Not, however, until 1939, did researchers, scholars, and scientists begin sustained, systematic efforts to discover the truth, an archaeological task that spanned 30 years. Carefully studying every known clue while literally unearthing others as they tunneled their way through a tangle of ancient structures beneath the magnificent high altar of St. Peter’s, they slowly unraveled the secrets surrounding the burial of St. Peter.

The Bones of Saint Peter is the engrossing true story of how these determined researchers finally solved the puzzle of St. Peter’s burial and rescued his bodily remains from centuries of oblivion.