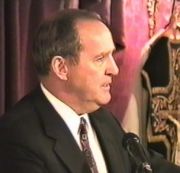 Title: The Conspiracy & The Church

The Catholic Church has been assailed and conspired against since its creation in 33 A.D.

Mr. McManus, starting with those first rebels who tried rebuilding the Temple of Jerusalem after it had been destroyed as a sign of God abolishing the Old Law, unpacks a plethora of historical events in showing how the revolutionaries of our era have tried destroying and infiltrating the Church in order to achieve a hidden, evil agenda. The most prominent the revolutionaries being the Freemasons and it is disturbing how much of a grasp they’ve held within the ecclesiastical hierarchy of the Church. Don’t be turned away by the word “conspiracy” for they do indeed exist and we can observe the fruits of the conspiracy in the Church in the aftermath of Vatican II. One doesn’t fight a conspiracy by debating it. One fights it by exposing it and stopping it with the truth.

Also available as MP3 and DVD