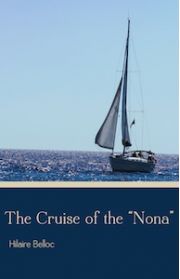 This book was written when Belloc was fifty-five years old, and it is a perfect introduction to the man and his mind. It is a set of mature reflections on sailing the sea, on life, and on all things universal and Catholic. He had lived courageously in the first half of the 20th century, when all the world was changing irrevocably, and the events of the era were now well-assessed in his maturity.
“Fortunately we have a guidebook to Belloc’s rich and variegated mind in The Cruise of the Nona. In this book which he wrote in a discursive and rare mood of self-revelation, will be found all that was Belloc. Here is the Poet, the Master of Prose, the Controversialist, the Historian, the Philosopher, and the Catholic. In this book too will be found the reflections of all his moods which were as bewildering in their number and rapidity of variation as were the characters he adopted. Both in mood and in character he was kaleidoscopic. Here is Belloc the Satirist, the Epigrammatist, the Loveable Friend, the Boisterous, the Wit, the Remote and Sombre, the Christian Champion, and the Pagan Mystic, the Learned Classicist as well as the gay Word-Juggler.
“It is impossible to write of Belloc without being contradictory and paradoxical, for he himself was both. There were however, two strong threads which were the warp and the woof of the backcloth against which all the many men who were Belloc appeared. These threads were a strong and simple religious faith and a passionate love of truth.” — From the Introduction by Lord Stanley of Alderly