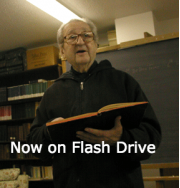 With the assistance of Father Feeney, Brother Francis had devoted over thirty years to the study of the Gospels before he gave classes on them. He actually memorized each of the four, and could recite Saint John’s Gospel in Greek. The best way to get to know Our Lord, he insisted, is to contemplate Him as He is revealed to us in the Gospels. Brother always insisted that If any other book preoccupies us more than the four Gospels then our priorities are out of order.

Brother Francis explains by citing scores of passages how the Gospel of Saint Matthew had the conversion of the Jews most in mind, which is why Matthew is the only writer among the New Testament authors to have written originally in Aramaic, the language spoken at the time of Our Lord by the Hebrews in Palestine. To convince the Jews that Jesus is the Messiah this first Gospel includes an abundance of examples of Old Testament prophecies fulfilled in Christ. Brother goes into depth explaining each of these passages referenced by Saint Matthew. 28 chapters on downloadable MP3, or MP3 CD

The commentary on Saint Mark’s Gospel was given by Brother Michael under the tutelage of Brother Francis. Brother Michael had studied the four Gospels in Greek and Latin under his teacher.  While not one of the twelve, Saint Mark was intimately associated with Saint Peter and is traditionally styled Interpres Petri, the “interpreter of Peter.” We should expect to find in this Gospel reflections of the Prince of the Apostles, especially his spontaneity, and we do. 16 chapters on downloadable MP3, or MP3 CD

Saint Luke’s Gospel was Brother Francis’ favorite. One of the reasons he was so enthused about Saint Luke’s Gospel was that this sacred writer gave much prominence to the cooperative role of the Blessed Virgin Mary and her indispensable fiat, her consent to be the Mother of God at the angel’s Annunciation. Saint Luke gave us the detailed account of the Annunciation and the Visitation with Our Lady’s sublime canticle the Magnificat. He also gives chivalrous tribute to other women whose lives were touched by Our Lord. 24 chapters on downloadable MP3, or MP3 CD

Brother Francis’ series on the Gospel of Saint John is his masterpiece. Brother takes full advantage of the fact that 90% of this Gospel is “fresh” material, not found in the three synoptic accounts. This is the Gospel written by him whom the East honored, and still honors, as “The Theologian,” on account of the sublimity of the inspired doctrine he delivered. It begins in eternity, “in the beginning,” before creation, with the generation of the Word. John’s objective was to defend the divinity of Christ against the Gnostic heretics who denied it. 21 chapters on downloadable MP3, or MP3 CD