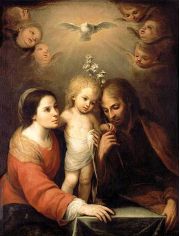 Since all of these talks were given before a live audience, most of whom were young and single, this presentation and the following one on choosing a partner were the most critical. How many couples, Brother stressed, enter upon the married life without even knowing what the sacrament is that they are receiving.  Taking his title from St. Paul, who in his epistle to the Ephesians calls matrimony “the great sacrament,” our speaker reflected upon the dignity of the vocation to the married life. As with Holy Orders matrimony is a sacrament instituted by Christ.  Although the Creator instituted marriage and the family at our first parents’ creation, establishing it as a holy institution, it was not a sacrament and it did not confer sanctifying grace.  It was part of the law of nature written on man’s heart.  From this theological and historical perspective, Brother moves on to his main thesis, which is the essence itself of this sacrament — what does the term matrimony mean, what is its matter (as defined by the Council of Trent), what are its primary and secondary purposes, and what are its three blessings?  This talk provides a wealth of material for an aspiring couple to carefully consider.  It also touches upon the wrong reasons to embrace a union that is holy by its sacramental nature.  Brother André also deals with the hard facts that are commonly ignored in Cana conferences, such as the sin of contraception and abortifacient drugs.

An article on this.