HomeSocietyPolitics and SocietyThe Hound of Distributism
79 of 114 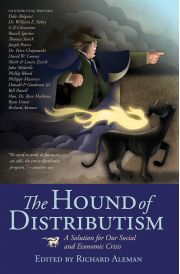 A Solution for Our Social and Economic Crisis

In 1891, Pope Leo XIII wrote the groundbreaking encyclical Rerum Novarum, which featured the Catholic Church’s response to the conditions of the working classes and unleashed modern Catholic social thought.

Inspired by Leo’s call for the law to “induce as many as possible of the people to become owners,” famed writers G.K. Chesterton and Hilaire Belloc crafted an alternative against the dispossession caused by the monopolizing ends of socialism and capitalism, which come at the expense of justice, the common good, and our natural resources. In a world obsessed with growth and globalization, Distributism is a political economy championing the sustainability of decentralized, local economies with the aim of ensuring the widest ownership of the means of production. The solution to our present socio-economic malaise is an economy as if people and God mattered.

The Hound of Distributism is a collection of essays written by leading distributist authors from around the world. Given our present social and economic crisis, this timely and rich volume challenges the sterility of our present by recovering the value of the socio-economic theory of Distributism.

Richard Aleman is the managing editor for The Distributist Review. He is a regular contributor for Gilbert Magazine, St. Austin Review’s Ink Desk, and The Remnant newspaper.

“If the government does not propose to protect the lives, livelihoods, and freedoms of its people, then the people must think about protecting themselves...How are they to protect themselves? ­ Here seems, really, to be only one way, and that is to develop and put into practice the idea of a local economy.”

“Now, if ever, is the time to insist on a more widespread distribution of property…an economic and social policy which facilitates the widest possible distribution of private property in terms of durable consumer goods, houses, land, tools and equipment.” —Pope John XXIII

“When it is a question of securing the necessaries for existence, a family should fully control the means of production; otherwise self-preservation would be jeopardized, being dependent on factors external to it.” — Monsignor Luigi Ligutti