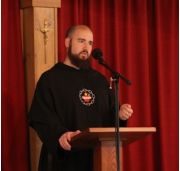 In his longer conference presentation, defining “liberalism” in its generally understood religious sense from the Dictionary of Dogmatic Theology as “an emancipation and independence of man, society, and State, from God and His Church,” Brother André Marie demonstrated how intolerant liberals are in the pursuance of their cause to “free” mankind from any authority that does not originate from themselves. In his effort to emancipate man, society, and the State from God and His Church, the liberal ends up being the most illiberal of men. Losing the freedom that comes from God and Catholic truth, the liberal, as history amply demonstrates, becomes a fellow slave with the tyrants who repress truth, who are niggardly and mean, and who make use of every available means to combat God and the means of salvation in the Church. Brother provided many enlightening quotes from popes and Catholic authors on the subject along with examples of the greatest repressors of the freedom due to the Church from the French Revolution until today.