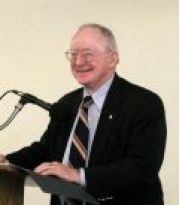 Title: The Importance of Thomistic Philosophy

With the experience of over a half-century teaching Thomistic philosophy, Dr. Traub easily extracted the most important principles of the angelic doctor and delivered them to his audience in a language all could understand. For those who had studied perennial philosophy years ago, the presentation was like a refresher course with a more timely application to the modern crisis of faith and morals. Our speaker's theme focused on the development of an informed and orthodox Roman Catholic conscience and the building up of a proper foundation of natural wisdom in order to better complement the higher truths of supernature, i.e., reason serving revelation. Beginning with the flippant dismissal of truth by Pilate, Dr. Traub highlighted the common denominator in all malformed consciences, i.e., an autonomy of convenience. Rather than informing the mind with truth and conforming one's conscience to it, those who suppress objective truth malform their minds with their own inventions of reality. The question so lucidly answered by Professor Traub in this four part presentation is how to achieve this informed Roman Catholic conscience and, on the other hand, how to heal a conscience already malformed where the patient is willing. In the first half, the speaker demonstrates how the principles of Boetius (who bridged the classical Greek period with the beginning of scholasticism) were of such essential value in establishing a foundation for scholastic philosophy. In the second half, he introduces logic and defines the three grades of "in-formation" of the mind: knowledge, science, and wisdom. These first two parts make a smooth transition into the third part of the talk, which is the formal theme underlying the whole lecture: forming a good conscience. Conscience does not create truth or the true good, Dr. Traub explains, it makes moral judgments based on its conformity with truth. This conformity is a kind of conception of the truth within the intellect, which in its own reality exists objectively outside the mind. This in-forming of the mind with the truth occurs through the process of abstraction. Finally, part four outlines the proper order of learning for a well-formed conscience. Our speaker's conclusions provide an excellent format for those wishing to study perennial philosophy according to an organic sequence that allows the mind to mature in wisdom: beginning with the fundamentals, which the discipline of logic offers, and ending with the highest truths of transcendental metaphysics. To know the true, the good, and the beautiful is to cultivate a foretaste of the beatific vision.

Rachelle S. Cyr 09/28/2008, 06.09 PM
As I have known Dr. Traub (as my professor in Worcester) his presentation, as expected, stirs the conscience. What a superb (profound) thinker and message deliverer. God Bless him!
Write a review