My cart Cart is empty
Cart is empty
View cart
Checkout
Home/Lives of the Saints/The Life of St. Phillip Neri: Apostle of Rome
We apologize for the layout change.
We are working on fixing it soon. 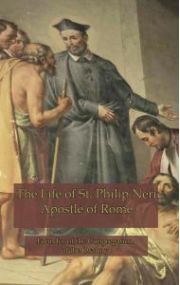 St. Philip Neri lived in the most important century for the history of Western Europe, and in the Catholic Church. Yet, he figures very little into its main events. Rather, he is present in the background, hearing confessions for hours a day, always at prayer, directing penitents in all orders of life, from nobles to homeless peasants. He directed great intellectuals like Cardinal Baronius, or the future Pope Clement VIII, as well as very simple souls and young boys.

This work, originally published in 1859, is largely a translation of Vita di S. Filippo Neri, written by Pietro Bacci, and is based on and augmented from documents in the Canonization process.

The work is an excellent and beautiful biography of St. Philip’s deep prayer life, his gift of prophecy, and how he worked tirelessly in obedience to Christ to lead all to Him, no matter what their state. It is a beautiful testimony of God’s providence at work to reform his Church.

The Mediatrix Press version of this reprint contains numerous pictures (including Churches where he lived and preached) as well as being beautifully laid out. This is a reprint, not a facsimile copy, that has been carefully edited.