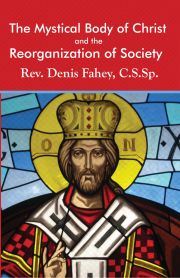 By Father Denis Fahey. Back in Print and Newly Typeset thanks to Loreto Publications.

Originally published in 1945, just eight years before his death, this is Fr. Fahey’s magnum opus. This work covers Christ's program for order in the world as elaborated by the Church. Topics discussed in this book include: Opposition to the Mystical Body by the Jewish Nation; Naturalism of Freemasonry and its effect on the Protestant revolt, the French and Bolshevik revolutions; The political and economic principles of St. Thomas Aquinas on the functioning of the gold standard and monetary reform.