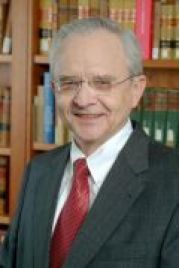 Professor of Law at Catholic University of America in Washington, D.C., for the past thirty-five years, contributor to the Remnant and Latin Mass magazine, Dr. Marcin is well respected as a traditional Catholic apologist. Teaching at CUA, that bastion of non Catholicity, he certainly knows the enemy. Our speaker began his talk by reminding his traditional Catholic audience that while doing their best to keep on the straight and narrow, which is the road of faith and tradition, they must always be prompt to support all good and positive things that issue forth from our pope and hierarchs, even if we are more often disappointed by the same. Making his point that it is much easier to dismiss the whole hierarchy, whatever the shade of liberalism to which they all seem more or less tainted, than to stay balanced and be a vital part of the reform, the professor went on to highlight some very critical remarks made by our present Holy Father, while a Cardinal, concerning Vatican II and the new humanistic orientation. Zeroing in on Ratzinger's analysis of Gaudium et Spes, the council's pastoral constitution On the Church in the Modern World, as a "counter syllabus" to both Pius IX's and St. Pius X's encyclical condemnations of modern errors and modernism, Dr. Marcin launched into the theme of his extraordinarily well structured presentation on the priestly Oath Against Modernism, as legislated by motu proprio in 1910 by Pope St. Pius X, and the dismal aftermath of its revocation by Paul VI in 1967. This revocation took effect, he said, even though Paul VI actually stated, shortly after the council, that the modernist conspiracy is "the most dangerous revolution that the Church has ever had to face and it is still scourging her severely." The quotations that our speaker provided from Pope Paul VI just prior to his death are a stunning admission. Over and over again this pope bemoaned the "self-destruction" of a Church in a diabolical crisis. "The tail of the devil," the pope said, "is functioning in the disintegration of the Catholic world. The darkness of Satan has entered and spread throughout the Catholic Church even to its summit. Apostasy, loss of faith, has entered into the highest levels throughout the Church." Dr. Marcin takes a different view of Pope Benedict XVI than that commonly heard in traditionalist circles; he finds in him a man who knows that the Church is in a doctrinal crisis as well as a moral one, but who applies the remedy slowly. The arch-demon, of whom Paul VI spoke, says Marcin, must be personally excised from the Church, and, so must his smoke, through which he has blinded the shepherds. A doctor of law, the professor concluded by stressing that a good step, in that ultimate exorcism, would be to re-issue the mandate of Pius X. Restore the Oath Against Modernism.