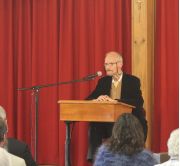 Theme: Total Consecration to Mary: The Remedy for our Ills.

Beginning with his usual wit and humor, Mr. Potter described his own inadequacy, speaking on so sublime a topic, as the “proverbial war correspondent who covers the fighting from a hotel bar.” He stressed that the goal of devotion to Mary will always fall short of the “totalness” that we promise in our consecration. One thing that was a surprise for listeners, giving them pause, was that Mr. Potter made no bones about the fact that he “loves” this life, with all the good things it offers, including, foremost, his own created existence. From hereon in, Gary spoke all about his Queen from the point of view of one who was not always a Catholic. His overall theme was the exalted Queenship of Mary, the Mother of Christ the King. She has the King’s authority and the King wishes that she be honored and loved as His chosen Queen, His chosen Theotokos (God-Bearer).  Mr. Potter spoke passionately about the religious and cultural things that drew him to the Faith and how that all was crowned in Pope XII’s bestowal of the title “Empress of the Americas” on Our Lady of Guadalupe in 1945. He ended with a call for Catholic men to be chivalrous, and for all the faithful to live the dignity of their vocation as children of God. Also Available as MP3 or MP4. Detailed notes are available on this talk upon request.