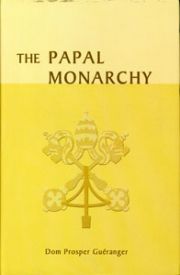 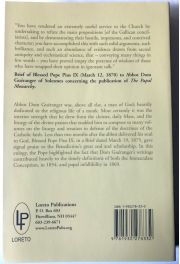 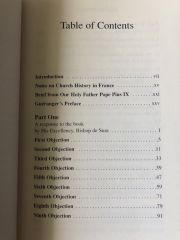 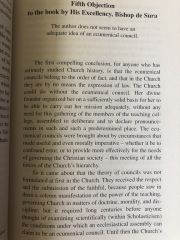 When nineteenth century Christendom shifted its allegiance from a divine vertical authority to the horizontal revolutionary ideals of egalitarian democracy and false liberty, Dom Guarenger's erudite polemical masterpiece contributed more than any other contemporary work to uphold the papal monarchy in all of its divinely ordained prerogatives. This labor of the holy abbot helped to restore in Catholic Europe the spiritual sword, as well as the magisterial cathedra, to the Vicar of Christ the King. And he did so, not by any clever manipulative abuse of language, but simply by appealing to the simplicity and clarity of the gospels, universal Christian tradition, and the common consensus fidelis. The brilliant hypothetical scenario, drawn by the author, of a college of a dozen apostles, called by Christ, but without a "Cephas" (a Rock) in Peter and his successors, presents even the infant "collegial" church in such an unenviable plight that one might pity them even more than one might pity the Methodists or Seventh Day Adventists, had any of them been at the marriage feast of Cana.

"You have rendered an extremely useful service to the Church by undertaking to refute the main proposition (of the Gallican conciliarists), and by demonstrating their hostile, impetuous , and contrived character; you have accomplished this with such solid arguments, such brilliance, and such an abundance of evidence drawn from sacred antiquity and ecclesiastical science, that, conveying many things in few words, you have proved empty the pretense of wisdom of those who have wrapped their opinion in ignorant talk.", Brief of Blessed Pope Pius IX to Dom Guarenger concerning the publication of The Papal Monarchy.