My cart Cart is empty
Cart is empty
View cart
Checkout
Home/Society/Politics and Society/The Party System
We apologize for the layout change.
We are working on fixing it soon. 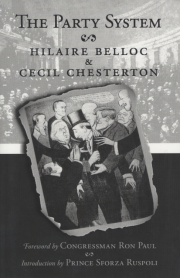 Pertinent to America, Britain, and other Western democracies, this book explains that what people believe happens in national assemblies and parliaments is radically different from the reality. Instead of being places where debate is intense, passionate, and aimed at the national interest, the fact is most members of these institutions act on behalf of powerful, unelected interests. They know, implicitly, who really runs the country—and their only real task is to decide if they want to try and rock the boat (thereby risking their salary, their reputation, their future), or stay silent for fear or favor. The book demonstrates beyond any doubt that the very nature of the system is hostile to democracy as laypeople understand it.
Paperback, p.157

Hilaire Belloc was twice elected to the British Parliament and is a prolific author on a wide range of political, economic, social and historical issues. Cecil Chesterton was and journalist and editor who was associated with the Fabian Society and later worked almost exclusively for The New Age, where he was an important contributor. In 1911, he became assistant editor on Hilaire Belloc's new weekly, The Eye-Witness, and when it folded in 1912, he bought the paper and renamed it The New Witness, which he edited until when he went off to war. His books include Gladstonian Ghosts, G. K. Chesterton: A Criticism, and A History of the United States. Congressman Ron Paul served in Congress during the late 1970s and early 1980s, where he served on the House Banking committee. He returned to Congress in 1997 where he serves on the Financial Services Committee as the vice-chairman of the Oversight and Investigations subcommittee. He is also the author of several books, including Challenge to Liberty; The Case for Gold and A Republic, If You Can Keep It. He lives in Lake Jackson, Texas. Prince Sforza Ruspoli is the prince of Cerveteri, Italy, the count of Vignanello, and the honorary vice president of the promotional committee of the Banca del Mezzogiorno at the Italian Ministry of Economy and Finance. He served as ambassador of the Sovereign Military Order of Malta to the State of Malta, of which order he is currently a Knight, and is a member of the Executive Committee of the Bank of Rome and the founder of the Centers of Agrarian Action.