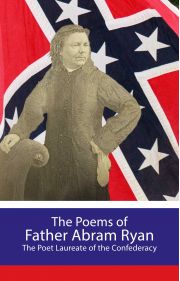 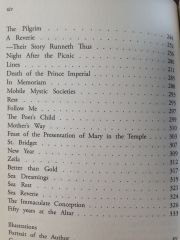 Matthew Abraham Ryan (he changed his name to Abram because the name Abraham became distasteful to him when Lincoln declared war on his nation, the CSA), was born in Norfolk Virginia of an Irish Catholic family from County Limerick and is known not only as a mystic poet of the Catholic religion but also as the Poet Laureate of the Confederacy. He was the most popular and most quoted and recited poet of his generation in the South and in the North. This is an exact reprinting of the 12th edition of his complete collected works that was issued at Baltimore in 1888.

Father Ryan worked as a chaplain to the troops of his nation during the long and brutal war that killed all of the hopes for freedom and nationhood among his people who rose so manfully to battle to defend their homeland in 1861. In the hour of defeat Fr. Ryan won the heart of the entire South by his poem Conquered Banner, whose exquisite measure was taken, as he told a friend, from one of the Gregorian hymns.

Beyond and above and permeating his deep and abiding love for the South was his love for our Lord and our Blessed Lady that is so powerfully expressed in his poetry and verse.His was the heart of a lover and a mystic, one who knows life and reality so well that anyone could say that he truly understood what Saint Augustine meant when he said that our hearts are restless until they rest in Thee O Lord! Take up this precious work of his and prepare to be truly moved in your heart and soul with the beauty and depth of these emanations of his beautiful Catholic soul.