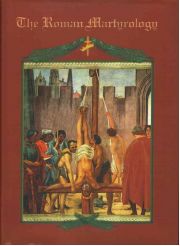 By The Roman Catholic Church

Originally, the Roman Martyrology was written as a catalogue of those saints who shed their blood for Christ during the early centuries of pagan persecution. Local churches celebrated each martyr's "birthday" into heaven, assigning the day of their final victory over the world as their feast day in the liturgical calendar. When she triumphantly arose from the catacombs, the Church gradually introduced other great saints, who were not slain for the true faith, into the Martyrology as she combined the recorded Acta of both east and west. These three hundred eighty four pages contain the names of thousands of our most valiant Catholic heroes and heroines along with a very brief biographical sketch commemorating either their martyrdom or their most enduring accomplishments. As an official book of the Roman liturgy, the Martyrology is read during the canonical office of Prime or at the evening meal in the refectories of most monasteries and convents in order that the religious might avail themselves of the intercession of those saints whose "birthdays" will be celebrated the following day.