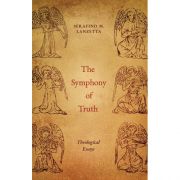 Theology is in fact the intellectus fidei—the intelligence of the one faith, the same yesterday and today, composed of distinct but analogical mysteries. The truth is symphonic, as Hans Urs von Balthasar says. It is like one piece of music played by many instruments. The greater the variety of instruments playing the same piece, the better they express the beauty of that one musical score. The same should be true of the multitude of believers around the world. If this is not the case, there is some lack, not in the mystery, but in the approach to the faith. The role of a single instrument is only clear within the context of the whole symphony. Similarly, it is only within the context of the whole faith, starting with the faith of the Church, that one can distinguish the peculiarity of a single mystery. This is what I tried to do by bringing together individual tiles of theology—theological opinions offering an interpretation of dogma and its defence when necessary, holding on as close as possible to revealed dogma—in order to compose one grand mosaic.

Praise for The Symphony of Truth

Fr. Serafino Lanzetta is one of the most capable theologians operating in the Church today. In this short volume, his grounding in Sacred Scripture and the tradition of the Church are on display in a series of approachable essays which will both challenge and inform the reader. He addresses challenges with a direct freshness and, in doing so provides food not only for thought but for prayerful contemplation too. — The Rev'd Professor Stephen Morgan, Rector, University of Saint Joseph, Macao SAR, China

In our times, debates over the Second Vatican Council, the 'hermeneutic of continuity,' and the pontificate of Francis have revealed massive cracks in the once-smooth façade of the Catholic Church; indeed they have indicated severe damage in the beams, pillars, and foundation. Yet the tools for addressing this crisis of theological architecture are singularly absent from media discourse and rarely found in academia. In this collection of essays probing the intersection of ecclesiology, morality, and the sacraments, Fr. Lanzetta demonstrates that he not only possesses the tools but uses them skillfully and charitably to illuminate the saving truth of the Gospel. Refreshingly, he does not shy away from a strong critique of current deviations as he defends the perennial teaching of the Church. — Dr. Peter A. Kwasniewski, Ph.D., author of The Holy Bread of Eternal Life: Restoring Eucharistic Reverence in an Age of Impiety

The Symphony of Truth will be valuable especially to theologians and pastors seeking to understand the philosophical, theological and historical roots of the current situation within the Church.  The author, who is very well-versed in recent and contemporary ‘continental’ theology, renders an important service by making these schools of thought accessible to English-speaking readers, and by providing a kind of ‘road-map’ of the various blind alleys which so many writers have gone down. — Fr. Thomas Crean, co-author of Integralism: A Manual of Political Philosophy