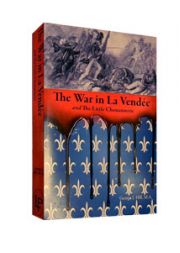 Few stories grip the heart and stir the soul like those tales of faithful Catholics who have risen up in arms to throw off the tyrrany of anti-Catholic oppressors. The great stories from the bible such as that of young David or Judas Macchabeus and his sons have their numerous counterparts in the history of the Church as well. What Catholic has not thrilled to such stories as that of the First Crusade, or the defense of Malta or the Battle of Lepanto—all victories for the Catholics. But even when the Catholic cause is not immediately successful as in such epic wars as the Jacobite rebellions, the nine-years war of Red Hugh O’Donnell and The O’Neill against Queen Elizabeth, or the fight of the Cristeros for a Catholic Mexico, the stark reality of such glorious sacrifices for the Faith inspires us down through the ages.

Such is the story of the War in LaVendée and the courage of youth displayed in the story of the Little Chouannerie by the teenage scholars of Vannes. The satanic explosion of hatred of Christ, of his Church, and of all that was decent in Catholic France that is known to history as the French Revolution was valiantly opposed in the west of France by a peasant army in both Brittany and in LaVendée. This is their story.

The names of Charette, LaRochejaquelein, Abbé Bernier, Cathelineau, Le Tiec, and Jean Chouan should be as well known to Catholics as those of Red Hugh O'Donnell, Bonnie Prince Charlie, Padre Pro, Godfrey deBouillion, Don Juan of Austria and others.

This story will break your heart…and will mend it as well.