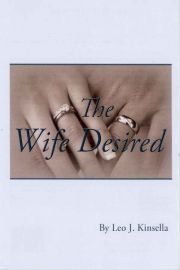 Here is a marriage blueprint that every woman can follow. Happy marriages do not just happen, they are made. It takes three parties to make a good marriage; the husband, the wife, and the Lord. This book is concerned with helping the woman to become “the wife desired”–and therefore loved–that every man worth having wishes to find and keep.
This book sold over a quarter of a million copies shortly after its publication in 1951, and it was read by Catholics and non-Catholics alike. It is a practical manual. It should be read by every woman considering entering the matrimonial state and also by those women who are already married. It can also be read by men who may wish to see what a real challenge it is for a woman to live up to their expectations and how grateful they should be if they are blessed to find the woman of their desires. Father Kinsella penned another book titled The Man For Her, (soon to be published by Loreto Publications), that covers the topic for the man.
When this book was first published in the early 1950’s, one in four marriages in the USA ended in divorce. Today, half of all first marriages end in divorce, and a much higher percentage of second and third marriages find the same end. This means that the majority of Americans are unsuccessful at the most important enterprise of their life, and it follows that the resultant destruction of the happiness, mental stability, and moral character of the majority of the people is the greatest problem that we face as a nation. Of course, the dangers to the salvation and earthly happiness of these people, and to the unfortunate children born of such unions, is where the cold statistical facts become more personal and of immediate concern to each of us. The divorce rates also do not speak to the issue of those many couples who do not divorce, but who nonetheless are not living in what could be termed deeply happy and fruitful marriages. Being a party to an unhappy marriage is one of the most difficult (yet largely avoidable) situations that anyone can endure in life.