My cart Cart is empty
Cart is empty
View cart
Checkout
Home/Audio and Video/Conference Talks/2015/Total Consecration to Mary: The Remedy for our Ills MP3 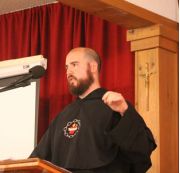 After giving the history of holy slavery to our Queen, Brother delivered a magnificent exposition of what exactly True Devotion and Holy Slavery to Mary should be for us who are consecrated to her, especially in confronting the challenges to our Faith in these trying times. Also Available as CD, DVD, or MP4