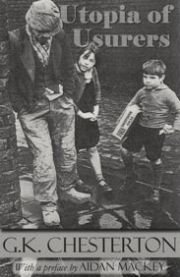 Utopia of Usurers is Chesterton at his energetic and boisterous best, taking on the economic and cultural apostles of modern industrial capitalism. Utopia is a collection of articles written from 19131915 for the Daily Herald, a Socialist paper which allowed Chesterton to attack Socialism as vehemently as they assumed he would attack capitalism. What results, then, in Utopia of Usurers, is a full-scale broadside against the folly of modern economic and cultural life, in the name of humanity, sanity, justice, and charity.

Chesterton looks at all aspects of modern, industrial capitalism, and finds them lacking. He analyzes the effect of the capitalist mentality on  among other things  art, culture, family life, work, and working conditions. With classic Chestertonian wit and rigorous logic, GKC points out how every single one of those aspects of daily, human life have suffered tremendously from an attitude that makes financial and material gain the End of life, at the expense of those higher and human values without which life is hardly worth living.