My cart Cart is empty
Cart is empty
View cart
Checkout
Home/Catholic Erudition/History/Vicars of Christ: A History of the Popes 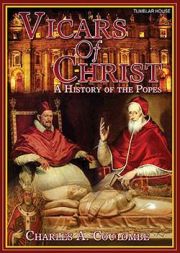 The Pope of Rome is the best known and most influential moral and religious leader in the world. Pick up the paper, turn on the T.V., and there he is. Every government in the world has to deal with him somehow. Love him or hate him, there is no denying his importance. It's this way today, and it's been this way since Emperor Constantine legalized Christianity in the 4th century.

In all that time, there have been wonder-working saints, lecherous murderers, and many, many mediocrities on the Papal throne - every kind of human being imaginable. Historically, the lives of Popes have been anything but dull and uneventful. Formosus was so hated by his successor, the corrupt Stephen VI, that his rotting corpse was disinterred and subjected to a court trial. St. Leo the Great frightened Attila the Hun into sparing Rome, while St. Gregory the Great banished the plague from the Eternal City by holding a procession. St. Leo III crowned Charlemagne Emperor by surprise on Christmas Day, but John XII (himself the son of a Pope) was killed by his mistress' lover, and died in her arms.

Most books about the Popes have either tried to whitewash every sin any Pope has committed, or else have made them all out to be all out to be anti-Christs. On this emotional topic, writers seem to have left very little middle ground. But the truth is that there have obviously been good and obviously evil Popes, controversial Popes and forgotten Popes. In this book, they will all have their day in court. One by one, each Pope will be profiled, and their rich history, with all its pageantry, intrigue, holiness, and crime, will be unveiled.