HomeCatholic EruditionHistoryVillains of the Early Church: And How They Made Us Better Christians
162 of 167 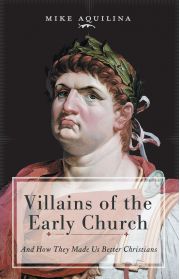 The early Church faced its share of villains—persecutors like Nero and Julian, heretics like Marcion and Arius. And what good were they? Plenty, say the Church Fathers. The threat of persecution made Christians strong and bold.

As noted author Mike Aquilina demonstrates in Villains of the Early Church: And How They Made Us Better Christians, the menace of heresy made Christians smarter — and deepened their knowledge of the divine mysteries. The villains of the ancient world proved the mettle of heroes like Peter and Paul, Irenaeus and Athanasius. Treachery and adversity inspired the Fathers’ clearest teaching, most entertaining invective, and more than a few memorable jokes.

The time of villains—and heroes—is hardly over. Through Villains of the Early Church, you’ll learn how you can keep your good humor through trials and opposition, and all the while grow sharper in doctrine and warmer in devotion.

Mike Aquilina is the author of many books about the early Church, including The Fathers of the Church, The Mass of the Early Christians, The Healing Imperative, and How the Choir Converted the World. He is executive vice-president of the St. Paul Center for Biblical Theology and a contributing editor to Angelus News. He is past editor of New Covenant magazine and The Pittsburgh Catholic. He has hosted eleven series on EWTN and two documentary films, and he appears weekly on “The Sonrise Morning Show.”

“Mike Aquilina provides a historically accurate, theologically sound, and even exciting rendering of these early villains and their errors. Not only will you come to know the bad guys, but you will also come to know the heroes who helped to make all of us better Christians. A timely read.”
—Thomas G. Weinandy, OFM, Cap., Member of the Vatican’s International Theological Commission