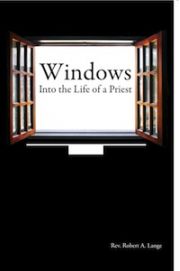 By Fr. Robert A. Lange

Father Robert A. Lange s engaging memoir, Windows into the Life of a Priest, supplies exactly what the book's title indicates, namely, an anecdotal account of one man's Catholic priesthood. While it is autobiographical in the sense that it is based largely on Father Lange's life and experiences as a priest, the aim and purpose of the book belong more to the realm of Catholic faith and devotion generally, and, indeed, to that of Catholic apologetics, giving reasons for the faith, offering a defense ... for the hope that is in [us] (1 Pet 3:13).

Among other things, Father Lange turns out to be quite an effective apologist for the faith. At various times in the text, Father Lange remarks, in effect, that It's not about me! Rather, it's about faith and God's grace, how important and indeed necessary they are, and how they literally make life worth living. Father Lange certainly shows that they have made his life worth living and worth recounting too, for the benefit of others, especially for those he calls wayward Christians. If God could save him and by save here is meant not only eternal salvation, but rescue from an aimless and empty life here and now why could he not save you or me as well? That, in fact, is precisely what God wants to do for all of us; he wants to save us from ourselves if only you and I will respond to his love, abundantly offered to everyone, and cooperate! This is an important part of the message that Father Lange never tires of repeating. — Kenneth D. Whitehead

No doubt every priest who has answered the call has a unique story. Father Lange's journey is at once captivating as he describes his personal path to a faith-filled priesthood. But it also captures a vivid example of the challenges and hurdles that every priest answers before, during, and long after he has accepted the heavy mantle (along with the many blessings) of the priesthood.

As with another reviewer, I am also a Catholic convert. And like 99% of everyone outside of the clergy (my guess at this statistic), I knew almost nothing of what it must be like on the journey to shepherding the Lord's flock. Father Lange's story will leave you thanking every faithful servant of God for their dedication and service. It will also reaffirm the love and protection of a loving trinity that is God, and inspire you to also seek the intercession of Mary, the Blessed Mother of Christ our Redeemer.

Full disclosure: Father Lange is my wife's uncle. In spite of this (ha ha) I give this book a highly positive review. Your spiritual life will be richer for the reading of—and learning the lessons in—this inspirational book.
David Ayscue 01/27/2014, 12.59 PM
Write a review