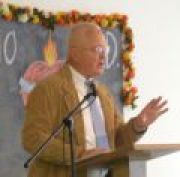 Title: Wisdom's Slow Fruitfulness And The Adventure Of Our Probation

As a professor of literature, Dr. Hickson has a keen eye for the right kind of books that would inspire Catholic ideals in this age of mediocrity and superficiality. In last year’s conference he introduced us to the historical wartime novel, The Red Horse, by Eugenio Corti, and this year he proposed for our consideration three other excellent works in keeping with “wisdom.” They were Gabriel Marcel’s The Decline of Wisdom, Maurice Baring’s biography of Robert Peckham, and the always intriguing G.K. Chesterton, in a review of his mysterious novel, The Return of Don Quixote. Of the three books, the one I thought would be the least interesting, Robert Peckham, proved to be the most fascinating. That choice, however, may well have had to do with Dr. Hickson’s awesome presentation of a complex character, who stayed loyal to the Faith amid the gravest of crises, and who surely grew, as did those whom his life touched, in “Wisdom’s Slow Fruitfulness.” The epitaph that this voluntary exile willed to be placed on his tombstone would be enough in itself to arouse a curious wonder about the man: “Here lies Robert Peckham, Englishman and Catholic, who, after England’s break with the Church, left England because he could not live in his country without the Faith and, having come to Rome, died there because he could not live apart from his country.” Chesterton’s novel, as Peckham’s life, was a story of conversion and redemption, or, as Dr. Hickson puts it, “slow fruitfulness.”

Also Available as MP3 or DVD

This text will be replaced by the flash music player.