My cart Cart is empty
Cart is empty
View cart
Checkout
Home/The Arts and Letters/Arts and Culture/Young Tony and the Priest: Coming to Belief in an Age of Unbelief 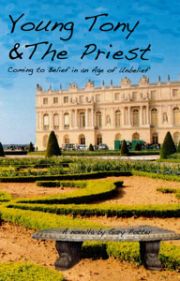 Young Tony and the Priest: Coming to Belief in an Age of Unbelief

One of the comments made about Our Lord by his contemporaries was that “He spoke as one having authority.” In the modern world, the Church seems to rarely speak as one “having authority”. This is unfortunate; some might say scandalous, for it is authority that men seek when pursuing truth. Young people are inundated with the message that truth, as an objective reality, does not exist . . . except for you alone. “Well, that’s your opinion!”, or “Make your own truth.”, or even Pilate’s own phrase “What is truth?”, are all too common phrases one hears nearly everywhere today. Even the term “faith” is now one of opprobrium instead of a declaration of virtue. One thing that does still speak with authority however, especially to the young, is example. In this powerful modern novella, one young man considers faith and whether it has any meaning at all to a man who wishes to truly live or whether faith is merely something one grasps onto when no clear answers to the deep questions of life are to be found elsewhere.

Gary Potter is a native of California. After attending public schools, a professional theater academy, and college, he spent two years sailing in the Merchant Marine and another four living in France, where he discovered the Faith. Following baptism into the Church and time working in advertising in New York, he began his career in Catholic Journalism in 1966 as a founding editor of the legendary Triumph magazine. Besides Triumph and two publications of which he later was editor, Truth & Justice and CCPA News & Views (the publication of Catholics for Christian Political Action), articles by him have appeared in National Review, Human Events, the New York Times, the Washington Post, The National Catholic Register, Faith & Reason, The Wanderer, The Remnant, The Angelus, From the Housetops, and numerous other publications. Mr. Potter lives with his wife, Virginia, in Washington, D.C. This is Gary’s first novella. He is the author of In Reaction, a series of Catholic essays, After The Boston Heresy Case, and is currently working on a book about the Social Kingship of Christ and a second novel.